Energy Agency for Southeast Sweden operate in the area of Blekinge, Kalmar and Kronoberg County, in the southeast part of Sweden.

The southeast area contains of 25 municipalities which are lower-level local government entities. The area is also divided in three counties which are the top-level geographic subdivisions of Sweden. In each county there is a county administrative board headed by a governor, appointed by the national government. There is also a separate regional council (region) in each county.

Together our municipalities have a population of over 600 000 inhabitants which is about six percent of the Swedish population. The major cities in the area are Kalmar, Karlskrona and Växjö which have populations between 66.000–96.000 inhabitants.

The region is characterised by a few cities surrounded by minor urban areas and large sparsely populated rural areas. The population density is low (20 inh/km2), on the average level for Sweden, but in some areas under 10 ihb/km2 or even lower.

Industry, companies and energy use

The region is highly industrialised and is well-known for its entrepreneurial traditions. The landscape consists of forest, farming and lake districts. Forestry and its three main products; timber, pulp wood and forest residuals (branches and tops) are prominent. We have some large sawmills, and pulp and paper industry companies in the area. The forest residual are used for district heating, both large, combined heat and power production and nearby district heating in all cities and many of the smaller communities. Up to 25% of the electricity used is produced in the area, mainly bio and wind power. The rest is imported from other parts of Sweden, all of which is fossil free.

Our region is characterized by many small industries, which are slowly decarbonizing. But our main challenge is the transport sector. Of the imported fossil fuel, 85% goes to the transport sector. As the electrification increases, prognosis foresee a rapidly growing need for more renewable electricity. 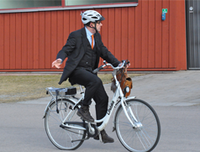 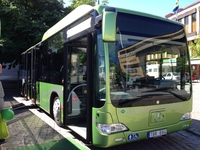