Half of the total number of car trips, is shorter than 5 km. In urban communities around 80 percent of the car trips are shorter than 3-4 km. Where  a normal bike or a bus might not be a convenient alternative, an electric cargo bike could very well to the job.  Click at the film above to get an idea how you could use a cargo bike. 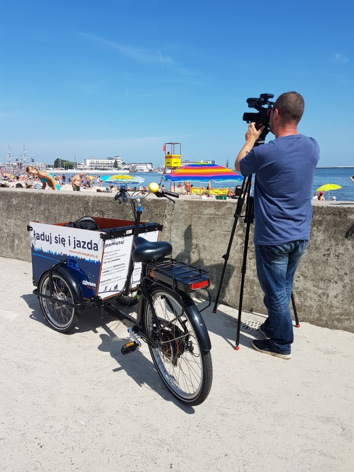 The media and promotion unit of the city of Gdansk are often out and about in the city, making film or taking pictures. During the summer of 2019 they borrowed one of the CoBiUM cargo bikes to see if it could make their job easier.

"A cargo bicycle gives us an estimated saving of at least several minutes", says one of the pleased employees. "Getting to the place of a larger event is much easier, because we get virtually to the destination, saving a few hundred meters of hiking in the heat with video equipment, which weighs a few dozen kilos in total! The problem of a lack of parking space for larger events, where in fact we need efficient transport over a short distance, disappears."

The places the media team often visit is easy accessable through bicycle paths, which ususaly go by nice places, so from a user's perspective the journey is much more pleasant than by car. So for a quick recording in the middle of the park, the team would quickly get to the place and have all the equipment at hand.

"The reactions of people we meet along the way are very positive, the cargo bike arouses interest, attracts attention, evokes a smile and curiosity." summarized the employee.

The team not only transported their equipment with the cargo bike, they also used  it for interesting shots with the camera person riding in the box as they filmed.

The cargo bike - an important part of the everyday puzzle

During the fall of 2019, Ida and her family borrowed an electric cargo bike from Växjö Municipality, Sweden,  for three weeks. The bicycle became a complement to the car the family of five, three of them children, usually use to solve the life puzzle.
It is through the Bicycle Library that Växjö Municipality has lent different types of bicycles to residents in the municipality. The bicycle library is jointly created as a part of the EU projects Cobium and Sumba.

According to Ida, the loan of the cargo bike has been a success for the family. It has lead to that they often leave the car at home. Especially in the evenings when it was used to move the two older children to and from their leisure activities, which often occur at the same time and at different ends of town. With the cargo bike the parents were able to drive each child separately instead and thus reduced driving around. The parents drove one child with the car and the other with the cargo bike. They also been taking trips to the store or to the playground with the cargo bike. 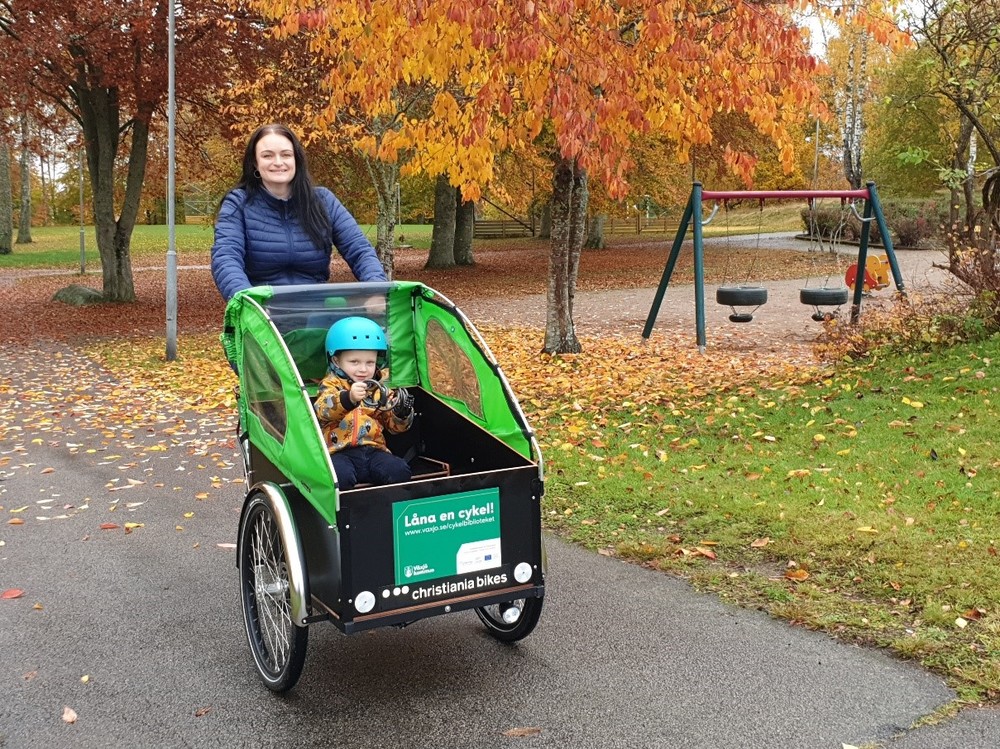 Borrowing a cargo bike to test is a success

Ida found out about the possibility of borrowing a cargo bike through advertisements in the local newspaper Smålandsposten and on Instagram.
The family has borrowed an electric cargo bike by the brand Christiania Light, which the say has been very easy to use. The family was a little cautious at first as the bike has no foot brake. However, there was just a short period of use, according to Ida, before the habit sat.

The bike has meant another opportunity for the family as they wanted to test the bike to see if it was anything that could suit them in their life. The loan has really proved successful as the family now is looking at both new and used bikes to buy.Having an electric cargo bike for the family has eliminated extra transport for some of the children as they would otherwise have to take the bus for the logistics to work. The family's view is that more environment than time is saved, which in itself is a big win.

Research from the CityChangerCargoBike (CCCB) project reveals that cargo bikes outmatch traditional delivery vans in almost every respect. While urban delivery trips account for 15% of all urban trips, their share of energy use currently amounts to 30% of all urban transport energy consumption. Cargo bikes, on the other hand, are a zero-emission transport option powered by humans.

The trial period has been a success. The two chairmen, Freddy Dahl Thomasen and Jens Christian Eskjær Jensen, use the cargo bikes almost every day and often many times per day. The cargo bikes are easy to use and can be parked close to the harbour. With the cargo bikes it is easy to get around, bike at small trails and to make shortcuts. It is also easy to stop and have a talk to the people they met.

The two men likes that they also get some exercise, and as bonus, they can bring their grandchildren with them. The cargo bikes each have a bench in the cargo hold for the children to sit on. The two chairmen lives about 2 km from the harbour in Bisserup and instead of using their cars between their home and the harbour, they now use the cargo bikes to bring tools or goods back and forth.

The borrowed cargo bikes are part of a CoBiUM pilot arranged by Slagelse municipality. 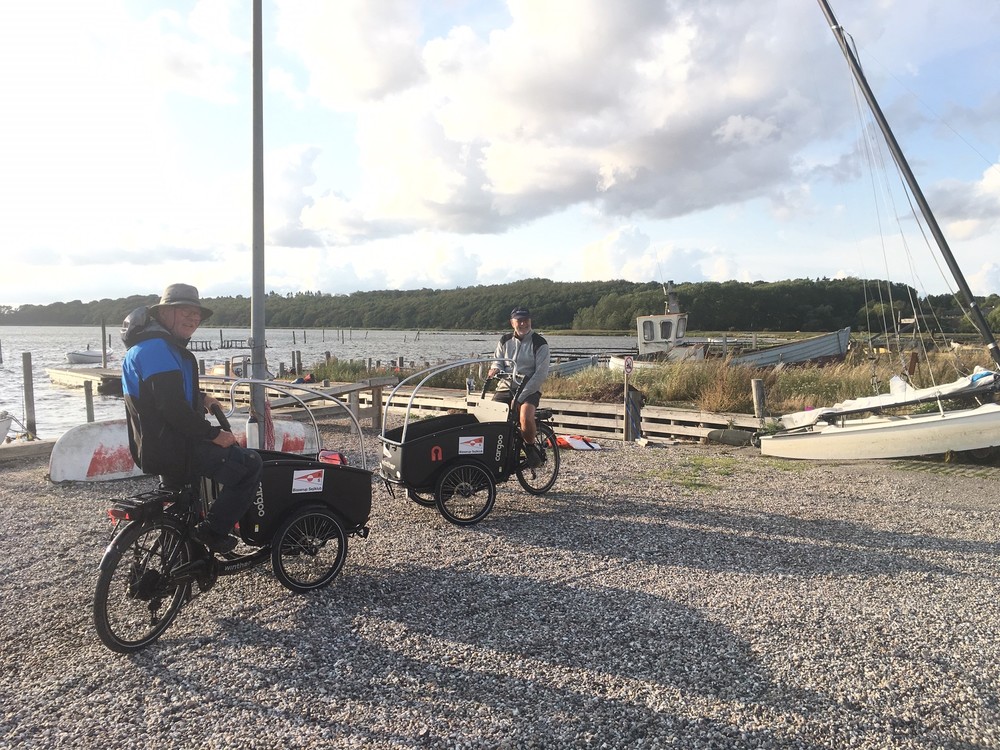 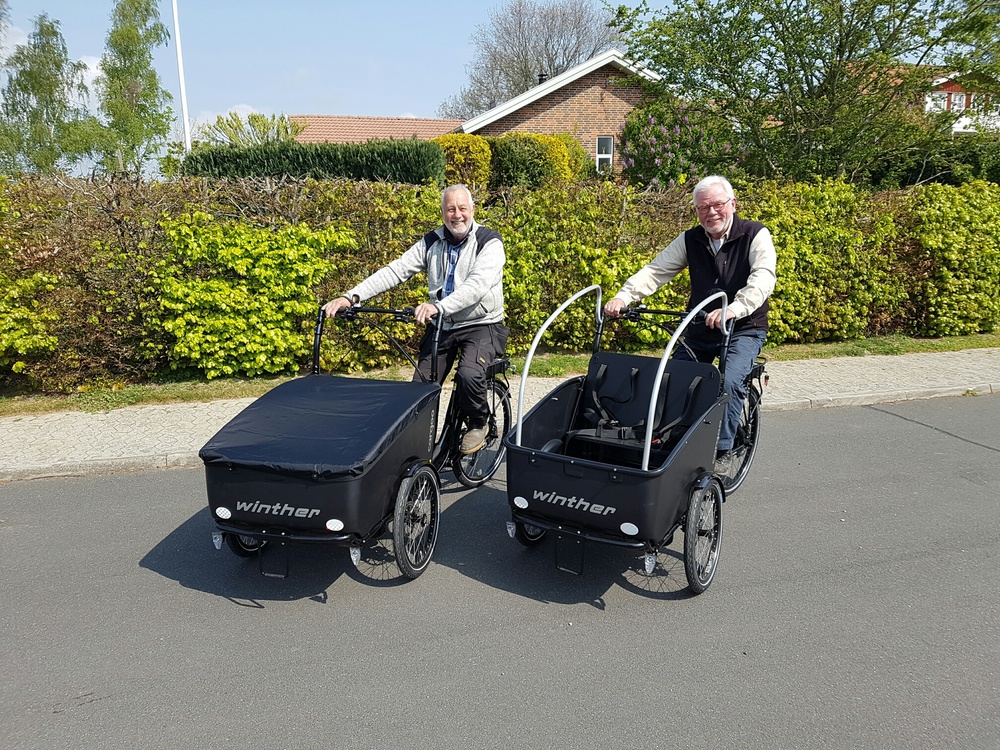 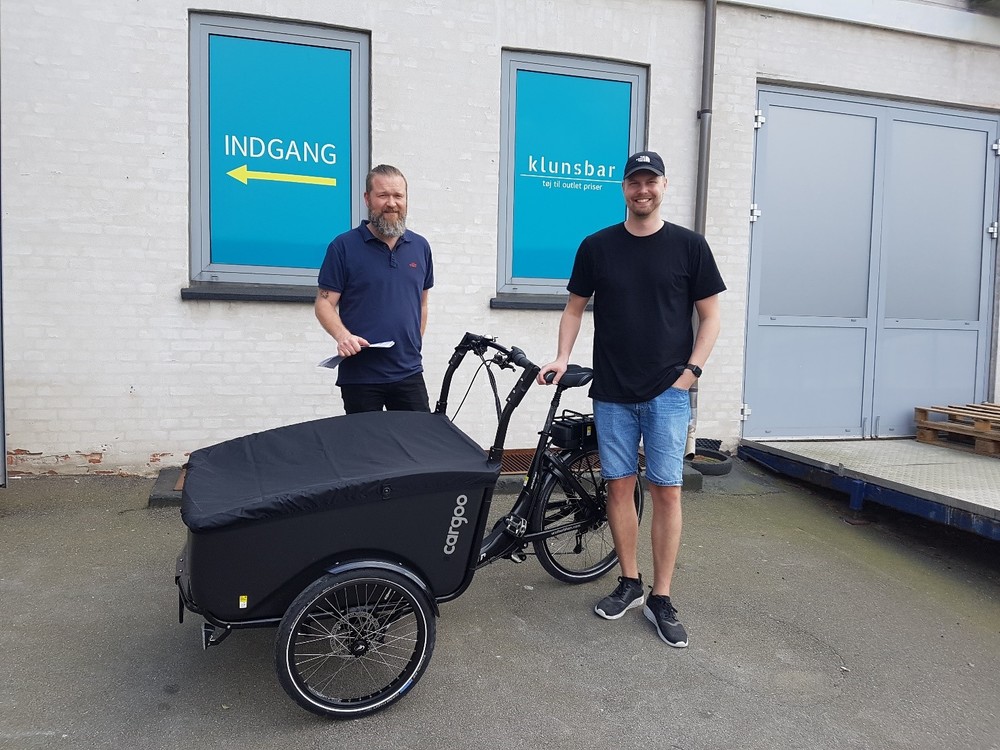 For about five months the clothing store called Klunsbar have been using a cargo bike to deliver clothes to their customers in Slagelse City.

The two owners of the clothing store, Christian and Martin, had a vision of a sustainable store. One example is that the store use secondhand fixtures they got from another store. The store started a web shop in the spring 2019 and the idea was to deliver the clothes to their customers in Slagelse City by themselves. They first planned to use a car to deliver the clothes, but when they heard about the opportunity to use a cargo bike, they immediately jumped on board.

The borrowed cargo bikes are part of a CoBiUM pilot arranged by Slagelse municipality.

CoBiUM is featured on the FEDARENE web page, where the CoBiUM film is promoted. See the article.

Release of the CoBiUM film

One of CoBiUM missions is to show that electric carbo bikes can be a real and convenient alternative to fossile-fuelled vehicles for many people living in urban areas. This film hopes to convey that in with a tongue-in-cheek sort of way.

Several cities around the southern part of the Baltic sea are currently in the process of procuring electric cargo bikes. The bikes will be lent out to businesses and private persons for a limited trial period or used in municipal services. The purpose is to let people find out how a cargo bike can work for them in their life or business, by being able to borrow a cargo bike for a couple of weeks. Another purpose is making the cargo bikes a regular feature of the cityscape, as municipal employees ride their cargo bikes around town.

In the cities of Greifswald, Slupsk, Gdynia, Slagelse, Växjö and Guldborgssunds municipality cargo bikes will be a visible mode of transport the next couple of years, as the South Baltic Programme financed project CoBiUM promotes electric cargo bikes as an alternative to fossil fuelled transports.

Long ago cargo bikes were a common sight in many cities, but they disappeared when cars became prevalent in the 1950's. Today, with more electric models to choose from and a wish for greener deliveries, the cargo bikes are again on the rise.

According to Swedish national statistics, 51 percent of all motorized trips in cities occur along such short distances and with so little cargo that they could be done by cargo bike. An electric cargo bike will easily cover a radius of 15-20 kilometres and are suitable for transport of small quantities of goods or equipment for commercial or repair companies. Or for commuting to work, shopping, or travel to sports activities.

- In large cities cargo bikes are common nowadays, but we think that there is a great potential also in a medium-sized city, says CoBiUM lead partner Amanda Johansson, Växjö municipality. Electric cargo bikes are a greener transport alternative, an alternative that both saves money and the climate, with a bonus of added health value.

Follow us in social media - look out for the hashtag #CoBiUM 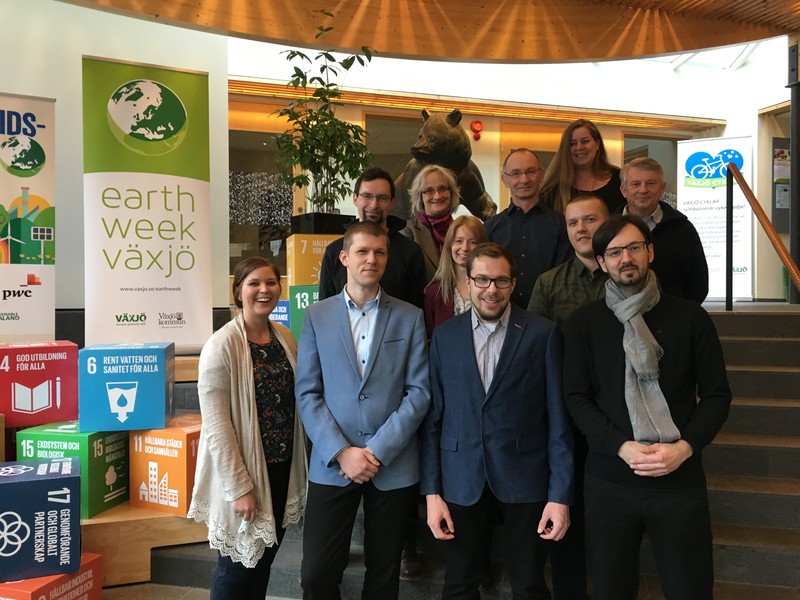 April 2018 - Research and stock-taking in the field of cargo bikes. Creation of the project steering group.

June 2018 - Stock-taking is completed, now follows analysis to serve as foundation for the creation of pilots.

September 2018 - Preparations for procuring cargo bikes to the pilots has started.

May 2019 - Project partners met in Greifswald discussing the pilots and the evaluation.

September 2019 - First stories from pilots were compiled and published.

October 2019 - Partner meeting in Slupsk focused on peer review of the pilots.

December 2019 - collection of news stories for the web page.

February 2020 - First analysis of pilots compiled. Planning for pilot period 2020 are under way. 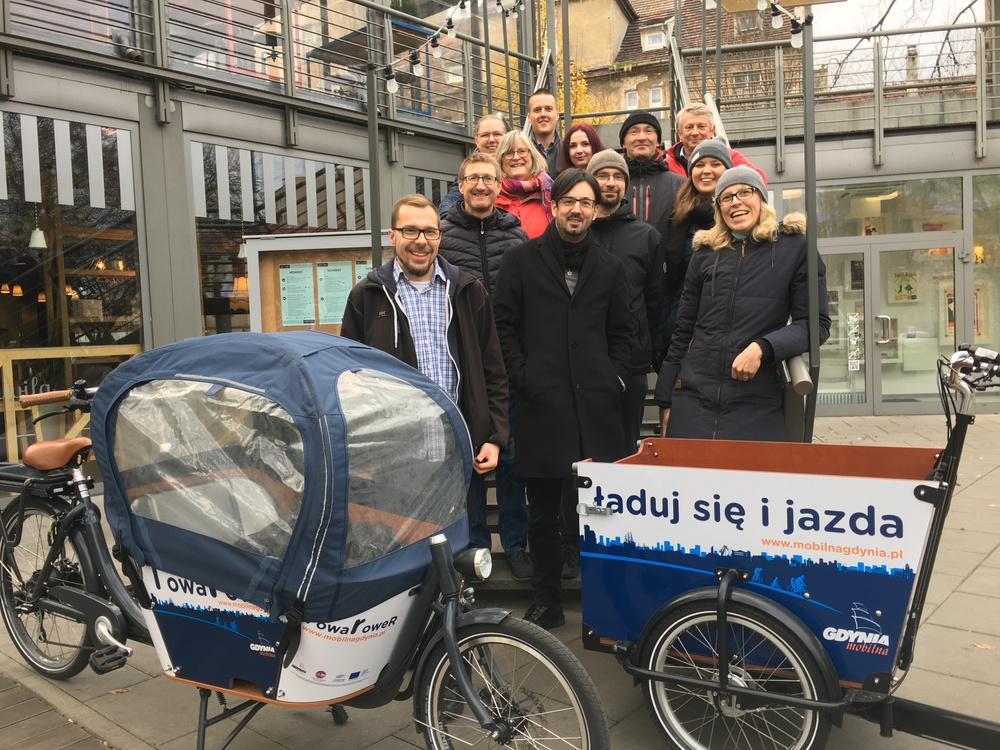 Better knowledge and increased use of cargo bikes in urban traffic!

CoBiUM (Cargo bikes in urban mobility) aims at reducing the number of fossil-fuelled vehicles in urban mobility in the partner cities by promoting cargo bikes as transportation alternative. Short distances in the urban environment are ideal for shifting trips from car to bike. For distances up to 5 kilometres the readiness of people to use their (non-electric) bike is highest. With pedelecs this distance goes up to 15-20 kilometres. We assume that these numbers do not differ for cargo bikes; the problem is rather that cargo bikes are not very well known and considered to be something very special and not for ordinary use. Through pilot applications, communication and campaigning CoBiUM wants to contribute to a better knowledge about cargo bikes and effectively an increased use among the different target groups.

In CoBiUM the partners will carry out pilots (with small scale-investments) in one or more of the three thematic areas (private use, municipal services and business logistics). The pilots themselves as well as the accompanying communication and campaigning will take into account the different levels of advancement in the respective country with regard to cycling culture and mobility behaviour. The project will result in guidelines and campaign material for municipalitys wanting to replicate the actions of CoBiUM.

In CoBiUM eight partners from four countries comes together in joint cross-border efforts to improve the quality and environmental sustainability of transport services in the South Baltic area;

CoBiUM (Feb 2018 - Jan 2021) is part-financed by the South Baltic Programme, which supports joint cross-border efforts to improve the quality and environmental sustainability of transport services in the South Baltic area.

The contents of this web page are the sole responsibility of the author[s] and can in no way be taken to reflect the views of the European Union, the Managing Authority or the Joint Secretariat of the Interreg South Baltic Programme 2014-2020.